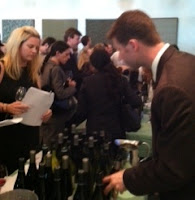 Spec's hosted a trade tasting featuring some of their top wines at Reef yesterday. The array of wines was interesting because the featured wines were in different price points and from many different places in the world, giving tasters the opportunity to compare a variety of styles side by side.

Upon my arrival, I quickly made the French Connection, starting with the line-up from Classified Wine and Spirits and their selection of wines from Burgundy. I started with an Aligote by Mikulski which was crisp, mineral driven and reasonably priced. It is a drink that could be enjoyed with simple seafood dishes all through our long hot summer. The more premium priced 2009 Fontaine Gagnard Chassagne Montrachet 1er Cru Les Vergers was another favorite on this table- smooth, round and all that you would expect in a wine from this area but with more of a tropical fruit note. I was a little more focused on the whites just because of the time of year but there were several lovely red Burgundies as well. 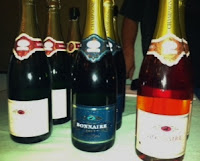 I was also interested in trying the three bottles of Champagne by Bonnaire which I had previously seen in a listing for top budget Champagne. They did not disappoint in this value for money assessment and I actually drank a glass of the Blanc de Blanc while munching on some of the seafood appetizers that were provided. 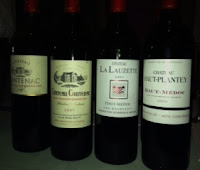 As I started to delve into the assortment of red wine, I stopped to talk to Frans, a fourth generation winemaker and his wife, Liz Roskam, who were serving up tastes of both their 2007 Chateau Cantenac Saint-Emilion Grand Cru and the 2007 Chateau Cantenac Saint-Emilion Grand Cru Selection Madame, which was a wine that was created for Franz's mother. Both were Merlot and Cab Franc blends and both were nice, mid-priced Bordeaux. 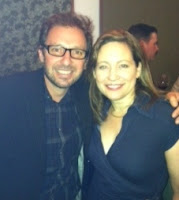 The rock star of the event was Philippe Melka who, in between pouring tastes of his 2009 CJ Cabernet and 2009 Melka Metisse Napa Valley, was graciously indulging the wine geek crowd with photo ops. These tastes appeared to be fully consumed by everyone, no dumping or spitting that I saw at this table.

With over 50 wines to be tasted in a two and a half hour time span and due to some distractions from other tasters, I unfortunately left much ground uncovered and I also left my tasting notes behind. But also of note, from Knights Bridge, was the 2010 West Block Chardonnay and the 2008 Cabernet Dr Crane. I was sorry to have missed the rest of that line-up. I also enjoyed the 2008 Riglos Gran Malbec, good fruit with good structure.