Master Sommelier Matt Stamp was back in town to teach a Ribera del Duero Masterclass for the Guild of Sommeliers at Pappas Bros Steakhouse. Essentially, I went in knowing some key facts about this region. I knew that it was located in the Duero Valley in Castille-Leon in Spain. I knew they only produced Red and Rosado wine primarily from Tempranillo. I knew Vega Sicilia was its most important winery having been in operation since the 19th century and I knew that Vega Sicilia had used Bordeaux grapes in their wines in the past. I knew the vineyards were at high elevations on the meseta where they received high levels of sunlight and I knew they enjoyed a wide diurnal range. I knew the Tempranillo from this area was darker colored and more powerful with pronounced aromas and flavors of dark fruit, mainly plum and blackberry, that it was  fairly tannic and could be a bit astringent.

Matt gave a good review of all of these things but he also went far more in depth with his coverage particularly with his breakdown of the provinces or sub-regions within the Ribera del Duero DOP. I hope to share more of that information in some upcoming posts.We discussed climate, soils, wine making styles and the value of 100 year old ungrafted Tempranillo vines. While there are many new young vineyards, there are also many old vines as well. Matt speculated that the heavy interest in the old vine sources will lead to more terroir driven single vineyard wines coming from this area in the near future. He had a "fun fact" that I did not know that apparently was in the wine news last summer-the parentage of Tempranillo had recently been determined to be the local white grape Albillo Major and a red grape known as Benedicto which is found in Aragon.

Of course, no matter how interesting Matt Stamp may be, the highlight of these events is always the tasting as he always selects some amazing wines. As expected, they were all interesting and came from some of Ribera del Duero’s top estates. With prices ranging from $15 to $450, there is something here for everyone to get a taste of one of Spain’s best wine regions.


2011 “Mibal” Joven, Bodegas Hornillos Ballesteros  Matt said that this was a good year for elevated structure and tannins. As there was no oak aging in this wine, it was a clear,very pure expression of Tempranillo. It would be a great red wine for summer. A fresh style with a dark berry character. Approximately $20


2008 Reserva Tinto, Pesquera  This wine was produced from a cold, wet and rainy growing season and very few Reservas were produced this year. The wine lacked ripeness and had higher acidity than the others. Cranberry, nutmeg, coconut and dill aromas and flavors but less pronounced. The oak was not fully integrated yet. Approximately $50 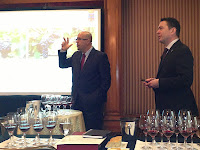 Rudy Buratti, head winemaker of Castello Banfi, was in town for a tasting and trade seminar on Sangiovese clones. For a wine journalist, this was an opportunity to meet a well-known winemaker and potentially find some good wines to recommend. For a wine student, this was an opportunity to hear a lecture specific to the different grape clones and the varying terroir throughout Montalcino, which is, of course, home to some of Italy's greatest wines. For a wine geek, the opportunities seemed endless.

We started with a clonal tasting of the three primary Sangiovese clones used in the blend for Castello Banfi's Brunello di Montalcino wines. All were from the 2011 vintage and all were grown in the Casanova Vineyard. These were not wines that you wanted to drink, the spit/dump buckets were in full use, but rather components that were just there to compare for a moment. The Janus 50 had fruity aromas and was both tannic and acidic with a medium length. The Janus 10 was spicy, very tannic and had a long length. The BF 30 clone was floral and fruity with tobacco notes and a short length. With all things terroir being equal, the importance of clonal selection is undeniable as you taste the differences between Sangiovese grapes which were grown next to each other. 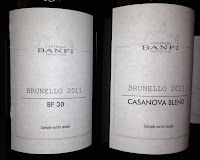 We followed this up with a tasting of wines from the same 2011 vintage which were created from the same field blend of grapes with each coming from a different vineyard with different soil types to showcase the influence of terroir. The wine from the Casanova Vineyard was structured and tannic. The wine from the Poggio D'Orcia Vineyard which sits on a hill above the river seemed more mature, it was softer and rounder with an almost sweet flavor but it finished quickly. The wine from the highest altitude Podernuovo Vineyard with its calcium rich soil was tannic with interesting aromas. The wine from the Sorrena Vineyard which sits on the sandy soils of the northern most part of the estate was a bit more rustic yet still fresh and fruity. Any guest who may have arrived to this tasting questioning the validity of the concept of terroir was converted into a believer by now, as the same grapes from the same weather vinified the same way with just a terroir tweak will make for some very different wines.

Rudy Buratti has been with Castello Banfi for over 30 years and his wine making philosophy is that a producer must respect the terroir and the character of the grape while bringing the style. In addition to his zonal studies on isolating the optimal clones for the estate's micro climates, his contribution  to the estate's style is also shown in the winery with his commitment to quality control and the design of some innovative wood and steel fermentation tanks which were patented by the Banfi wine making team.

We concluded the formal portion of the tasting and lecture with three Brunello di Montalcino wines, all of which, I would recommend:

I was pleased to get an invitation for a wine tasting lunch at Sorrento Ristorante Italiano featuring a trio of Amarone wines from Sartori di Verona. I enjoy having these opportunities as a "student of wine" to review specific regions and wines that I may not have looked at in a while and, of course, I also just enjoy lunching with smart, well-dressed people while discussing wine and food.

The main reason that I had not looked at the wines of this area lately was also right on the invitation, when referencing the Amarones it said they proudly categorize them as "food wines" as if to indicate most were not.

In various wine classes that I have taken, we would learn about the different red wine styles of Valpolicella and do a tasting which always seemed to end the same way. We were told in lectures that this could be a great wine for a variety of food but when discussing pairing options for whichever Amarone della Valpolicella had been chosen for the tasting, the different instructors would invariably say, “With this one, I would just do a cheese course.” This was due primarily to the wine having a heavy, raisiny almost Port-like quality. I wasn’t inspired to seek it out for dinners at home.

I was excited to get a fresh perspective from Andrea Sartori, owner of Sartori di Verona, and their celebrated winemaker, Franco Bernabei. Andrea shared stories of his family and their long time in the wine business as well as discussing the progression of quality over the past decade with the addition of Franco to the team. Whether he was speaking about his time as the former president of Italy’s primary wine producer’s trade group, climate issues, the region and where it is headed, his wines or his young adult children, the main impression that I received was that Andrea Sartori is a man who really cares about everything with which he is involved. He seems intent on making sure that it is the best it can be and this can clearly be seen in all the wines we tasted this day.

I was seated next to Franco Bernabei who, through the help of a translator, discussed his pleasure at being back home after many years in Tuscany and elsewhere in Italy, his goal to make wines that are consistent from your first sniff until the taste is finished and his lack of concern with typicity. He favors finding the individuality that different terrain produces. Franco was an interesting and an impeccably well mannered lunch companion and I was left wishing that I could speak Italian.

We tasted through some of the Sartori line with some light snacks before lunch. Of particular note was a rich, fruity white, the Ferdi Bianco Veronese IGT, which is a 100% Garganega wine made from dried grapes and the Pinot Noir-Provincia di Pavia IGT, an elegant Pinot at a reasonable price. Our main course was a pasta with lamb Bolognese and it was served with the Amarone della Valpolicella Estate Collection, the Corte Bra` Single Vineyard Amarone della Valpolicella Classico and the I Saltari Amarone della Valpolicella. All were full bodied, intense reds with great balance and structure that paired very nicely with the pasta dish proving that they were not just interesting wines to taste but were, indeed, good “food wines” and certainly wines worth seeking out.
on June 12, 2013 2 comments: