Winemaker, Enrique Tirado, from Don Melchor, Concho y Toro’s ultra-premium label, was in Houston last week conducting a vertical tasting of this iconic wine at Galleria area restaurant, Tango & Malbec. This was a real treat for the local wine trade and media as this was only a two state tour beginning in California and ending in Texas.


Enrique Tirado has been the head winemaker at Don Melchor since 1997. The only time he worries about his vineyards is when he is not there to handle any issue that could arise, that is the worst part about traveling for him. He can deal with anything else. He likes to watch the daily evolution that is always happening in the vineyard. Hearing this reminded me of how parents talk when they are traveling and I like that in a winemaker. I like to know that kind of care and attention go into each vintage.
The vineyard area is in Puente Alto which is located in Chile’s Maipo Valley at the foot of the Andes Mountains. The vineyard is subdivided into smaller parcels based on different terroir so each vine in each area can be specially tended to based upon its needs. This enables each section to be picked at the optimal time of ripeness. There are seven parcels with each one producing a different style of wine. One parcel might produce a wine with ripe fruit and soft tannins while another one creates a very concentrated tannic wine. All of these come from same vineyard but from the different soils in each parcel. The common feature of the soils is the lack of nutrients but the site holds multiple soil types including alluvial, stony and volcanic. The vines range in age from 20-35 years. Enrique feels that the complexity of the finished wine comes from the careful blending of the wines from the different parcels.
Puente Alto has a cool climate within a warmer region; the warm days bring ripeness while the cool nights protect the grape’s acidity. While they get some rainfall in the spring and summer, irrigation is needed. Harvest typically begins in April.
In July, they taste the wines to make the final blend.  They use 100% French oak with 14-15 months maturation in barrel and a year and a half in the bottle before release. Enrique says the focus of Don Melchor is to make a wine of quality that has finesse with good concentration but with soft ripe tannins that is expressive of the terroir. I would say he has achieved his goal. All of the wines that we tasted were rich, full bodied and balanced with no overt vanilla, toast, or oaky nuances and each one was a pleasure to taste.

All highly recommended for your next wine splurge! 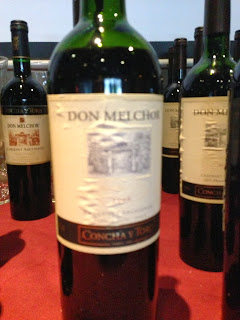