Notes on the Livermore Valley AVA 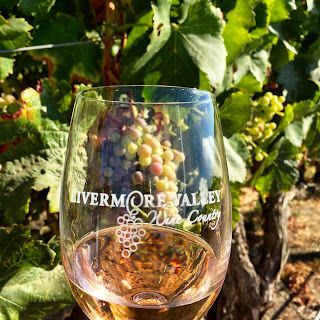 The Livermore Valley AVA is situated in northern California’s Alameda County and has 3,400 vineyard acres. Terroir features include well-drained gravel-based soils and wide diurnal swings. These temperature shifts are created from both the early morning fog and the evening breezes that come in from San Francisco Bay which is located only 35 miles away. The valley is also distinctly oriented laying from west to east instead of the more typical north to south. This unique placement enables it to fully enjoy these daily maritime climatic advantages.

The AVA gets its name from Charles Livermore who planted the first grapevines for commercial production in the area in the 1840's. Recognition for the region would follow when Cresta Blanca Winery, owned by Secretary of the California Viticulture Commision, Charles Wetmore, won the grand prize at the 1889 Paris Exposition. This wine was the first from California to win in a tasting competition in France. Long before the Judgment of Paris was held, Livermore put America on the world wine map.

Two other wineries founded during this same time period managed to stay in operation throughout prohibition and have continued to remain leaders in California wine production. They are Concannon and Wente Vineyards. Family members have run these without interruption to the present day. The contribution to California winemaking from each is tremendous. Currently, eighty percent of California's Cabernet Sauvignon and Chardonnay plantings come from these two vineyards' clones.

Although more than twenty-five grape varieties are now being grown, Chardonnay and Cabernet Sauvignon remain the most important grapes in the region.

The valley now has over 50 wineries. The Livermore Valley Winegrowers Association hosts numerous events and tasting experiences for consumers to enjoy throughout the year. With less than an hour drive from San Francisco, Livermore Valley is an ideal destination for your next California wine vacation.