International Albariño Day has been expanded from one day to six days this year and it is starting now! Follow along on social media and share your personal celebration with the world by using #AlbarinoFiesta.

Albariño is the most important white grape of the northwestern Spanish wine region, Rías Baixas, pronounced Re-ass By-shass. The area is known as "Green Spain". The climate and soil are heavily influenced by the Atlantic as the vineyards lie along the long coastal plains of Galicia bordering the ocean. The climate is generally cooler than much of the country with plenty of rainfall. The Albariño variety does well in this terroir creating refreshing light white wines that are perfect for summer sipping as well as making an excellent pairing with simple shellfish dishes. 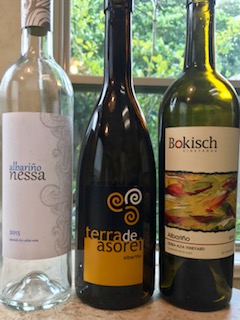 Terra de Asorei Rías Baixas Albariño 2015 - A bit richer and rounder, this wine has aromas of refreshing lemon citrus with fresh herbs and a light tropical sweetness in the persistent finish. SRP $16

Bokisch Terra Alta Vineyard Albariño 2015 - Made from organic and sustainably farmed grapes, this wine is light and fresh with citrus blossoms, orange zest and grapefruit with a slightly tart lingering citrus finish. SRP $18